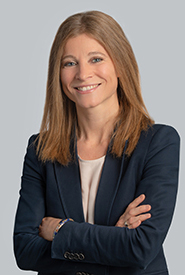 >> All our practices
Jeannie Credoz-Rosier was made partner in January 2013. As a labour law specialist, she has developed particular expertise (advice and litigation) on various questions concerning relationships with staff representative bodies and their elections and discrimination/equal treatment issues. She also regularly advises companies on their restructuring operations. She co-heads Collective negotiation & working time and Ethics & Diversity practices.

A graduate of the Institut d’Etudes Politiques de Paris (Sciences-Po), Jeannie Crédoz-Rosier holds a Master’s Degree in General Private Law from the Paris II University. In January 2004, she began to work with Joël Grangé’s team at Gide Loyrette Nouel, before joining Flichy Grangé Avocats with this team in 2008.
All Partners
IMPORTANT COOKIES INFORMATION
We use technical cookies to ensure the proper functioning of the site, we also use cookies subject to your consent to collect statistics visit.
Click below on & laquo; ACCEPT & raquo; to accept the deposit of all cookies or on & laquo; CONFIGURE & raquo; to choose which cookies require your consent will be registered (statistical cookies), before continuing your visit to the site. Show more