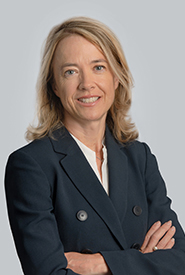 >> All our practices
Blandine Allix advises employers on labour-law issues, essentially on collective and individual disputes, including both labour law as such, and its criminal law aspects.  She develops an expertise with the labour law issues that have arisen through new technologies.

Blandine Allix holds a Masters in Law and a post-graduate degree in HR Management (DESS : Ingénierie des Ressources Humaines) from the Université Paris V.  From 1999 to 2002 she was with Salans as an associate in its labour law department, then an associate with Gide Loyrette Nouel from 2003 to 2008 before joining Flichy Grangé Avocats as a partner since 2008.

Member of the board

Blandine Allix is a member of Cyberlex, Law and New Technologies Association.
All Partners
IMPORTANT COOKIES INFORMATION
We use technical cookies to ensure the proper functioning of the site, we also use cookies subject to your consent to collect statistics visit.
Click below on & laquo; ACCEPT & raquo; to accept the deposit of all cookies or on & laquo; CONFIGURE & raquo; to choose which cookies require your consent will be registered (statistical cookies), before continuing your visit to the site. Show more