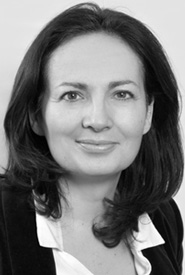 She counsels both French and international firms, and represents them before the Courts as well.

Stéphanie Guedes da Costa graduated from the Institut d’études politiques de Paris (SciencesPo) and holds a Magistère in Labour Law from Paris X University. In 1996, she began her career with the labour law firm Bélier & Associés, before working with Freshfields Bruckhaus Deringer for eight years where she was appointed Counsel.

All partners
IMPORTANT COOKIES INFORMATION
We use technical cookies to ensure the proper functioning of the site, we also use cookies subject to your consent to collect statistics visit.
Click below on & laquo; ACCEPT & raquo; to accept the deposit of all cookies or on & laquo; CONFIGURE & raquo; to choose which cookies require your consent will be registered (statistical cookies), before continuing your visit to the site. Show more