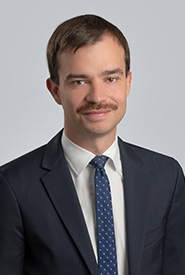 
>> All our practices
Romain Guichard has developed an in-depth expertise in compensation, benefits and governance matters in particular  for investment funds and French and international listed groups.

He has also been a member of several juries for public service competitions and he constantly authors articles in legal journals.

Romain Guichard holds a Master degree II  in general private law from the University of Paris I Panthéon-Sorbonne and he joined the firm in 2012, being a part of Joël Grangé’s team.
All partners
IMPORTANT COOKIES INFORMATION
We use technical cookies to ensure the proper functioning of the site, we also use cookies subject to your consent to collect statistics visit.
Click below on & laquo; ACCEPT & raquo; to accept the deposit of all cookies or on & laquo; CONFIGURE & raquo; to choose which cookies require your consent will be registered (statistical cookies), before continuing your visit to the site. Show more