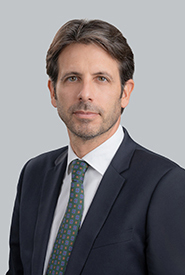 
>> All our practices
Emmanuel Raynaud is an acknowledged specialist in criminal law and procedure, and more particularly, in the labour-law aspects of criminal law.

In 2001, he was elected Secrétaire de la Conférence du Stage.

He advises and represents clients in the Criminal Courts throughout the proceedings.

Maître Raynaud participates in conducting courses and audits on criminal risks; at the Paris Bar’s School he has been teaching a course entitled “Argument:  its theoretical and practical aspects“.

Emmanuel Raynaud first began to practice in 1999 with Gide Loyrette Nouel; he then founded the firm Rivedroit in 2009 before joining Flichy Grangé Avocats in 2018.